In many large cities, traffic jams and slow moving traffic are a recurring phenomenon and easily lead to road rage. But not in Frankfurt am Main, Germany. Road rage doesn’t stand a chance against the new traffic management centre, which also uses our KVM products. 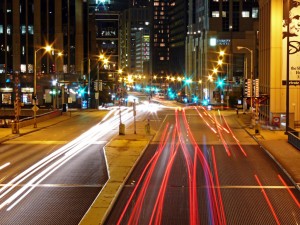 Frankfurt is a city with ever-increasing traffic partly caused by many commuters. But the increasing traffic increased the requirements of the traffic management centre as well. That’s the reason why it was expanded to the limit until both the team and the devices were no longer able to carry out their tasks.

The new control centre is equipped with state-of-the-art technology. The German company Jungmann Systemtechnik planned for the products to be applied in the traffic centre. Finally, Siemens AG Building Technologies implemented all technical devices. But planning and implementing the technology wasn’t enough. Any devices in use needed to be reliable, since the traffic management centre coordinates the city’s entire road network.

A 14 square meters large back projection screen shows images of 80 cameras and 800 traffic lights spread across the city. Any data relevant to traffic is collected and evaluated. The results are adapted to the current traffic volume in the entire Rhine-Main region. Especially when it comes to big events on the streets of Frankfurt, the team of the traffic management centre has to ensure that no drivers suddenly end up within the masses.

Monitoring Frankfurt’s roads requires precision and focus. While equipping the new traffic management centre it was extremely important to avoid anything that would distract the employees. That’s why the computers were removed from the control room and stored into a separate, access-protected equipment room. 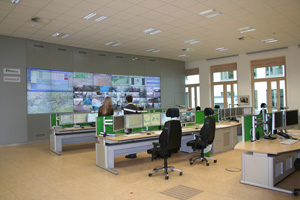 However, the employees still need to be able to access their computers. And if possible with as few cables as possible. By installing KVM matrix switch systems, multiple computers can be operated from multiple consoles. The advantage? If need be, more consoles and computers can be added to the system. When thinking of the ever-increasing traffic in Frankfurt, this feature surely will come in handy in the future.

Along with the computers, annoying fan noises and heat left the traffic management centre as well. Now employees can enjoy optimal working conditions.

Guaranteed safety in the event of technical failures

Safety played an important role when installing the system. The control centre required a fall-back system where most of the devices would still work even if the main components would fail. Otherwise, this could have fatal consequences for inner city traffic.

To prevent such total system failures from the beginning, Siemens AG Building Technologies equipped the control room with a redundant KVM system. In case the main system fails, the second system continues to monitor the city traffic. Since any KVM devices operate independently from the LAN, network failures can no longer harm them.

Thanks to the future-proof KVM system, Frankfurt’s traffic management centre will continue to protect drivers from road rage.

How about you? Do you often find yourself in traffic situations that could easily lead to road rage? Or do you have ideas how to avoid it? Leave us your suggestions in the comments.