The term latency comes from the Latin word “latens” = “hidden”. What’s meant here is the time between cause and effect, between stimulus and reaction, also called response or delay time.

Latency – a simple but demonstrative experiment: 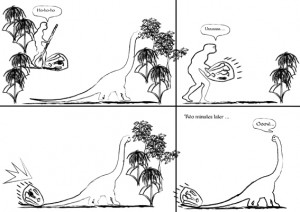 Let’s take a standard dinosaur, model brontosaurus, from the Upper Jurassic. Length: between 21 and 36 metres from head to tail, a cute little animal weighing 30 to 35 tons.

Now imagine a Stone Age man, a hunter, model…well there weren’t any models back than. But then, this is only an example. Add a nice sharp stone weighing another ton.

And now it gets interesting: The hunter takes the stone (yes, he can lift it, remember it’s all hypothetical) and throws it on the dinosaur’s tail.

The information about the pain runs extremely fast through the nervous system of our brontosaurus, takes a few bends up the back, spirals around the vertebra and finally reaches the brain stem where it is processed by the “pain centre”.

That’s how you have to imagine latency. Unfortunately, when dealing with KVM, we don’t have as much time as our hypothetical dinosaur. And by the way: The Stone Age hunter didn’t escape him. A different type of latency …

With KVM, the latency period is important when it comes to hand-eye coordination, meaning when using a mouse to operate a computer via KVM extender or KVM matrix switch, for example. Here, users aren’t supposed to notice a delay between moving the mouse and the corresponding reaction on screen. And by “not noticing” we’re talking about delays of a twentieth of a second. There might be experienced users who notice delays under this value and thus far away from the stone-dinosaur coordination.

By the way: No dinosaur was harmed during this blog post!