Are you often distracted by the constant buzzing and humming of computers under, next to or on your desk? Depending on the noise level, this surely can wreck your nerves. Especially when combined with the heat emitting from computers in use. If you’re alone in your office you might learn to ignore the constant noise.

But if you’re not willing to ignore it, or if you’re working environment simply cannot exist without a large number of computers, you might want to look for solutions. How about removing computers to a separate equipment room? And this room would be cool, dry and free of dust – everything your computer needs. You would have more space, no additional heat or distracting noises.

But how do you access your computer if it’s not in your office. That’s were KVM technology comes into play. This kind of technology connects your workstation, consisting of keyboard, monitor, mouse and whatever other peripherals you might need, to the computer in the separate server room.

With only one computer in your office, you may think that a KVM solution might be a bit too much and I must admit it probably is. But if you’re working at the tower of an airport, a traffic management centre or behind the scenes of a TV production company, you already know that monitoring processes requires a lot of focus. Every careless action might have fatal consequences. But monitoring process also requires a large number of distracting computers.

Monitoring means taking care of a certain sector and making sure processes run as smoothly as they are supposed to. The word “monitoring” already includes one of the most important auxiliaries: the monitor. But at towers at airports, studios or control rooms usually don’t need just one, but many monitors.

On top of that you’ll often need a keyboard, a mouse and other peripherals to operate a computer. But control rooms are smaller than you’d think. Usually, the computers would share this limited space with the controllers.

Obviously, sharing a room with multiple computers has several disadvantages: the room gets heated up, it’s loud, and computers require lots of space. Conditions, in which neither employees nor computers are able to work efficiently. 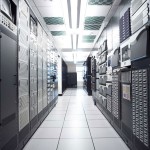 To be able to focus on their works, employees in control rooms need as little distraction as possible. So the first step is to get rid of computers – the number 1 source of distraction. Without them, the controllers can work in a quiet environment.

KVM extenders establish a connection between employees and computers. Even over great distances they extend mouse, keyboard and monitor signals. Now employees can work without having their computers directly placed at to their desks.

The computers are moved to the server room. After the entire system is implemented, only the essentials such as furniture, monitors and the required peripherals are placed in the control room. To access and switch between the remote computers, the controllers can press a button at the KVM switch on or under their desks.

Have you ever been unnerved by the distracting buzzing of computers in your office? And did you find a solution for the problem?