SMM, the biggest international trade fair for shipbuilding, machinery and marine technology took place in Hamburg, 9-12 September. And since KVM and the shipbuilding industry seems to be a good fit, we participated for the first time. Now that our trade fair team has returned home from distant shores, it’s time to take a look back at the three days in Hamburg. 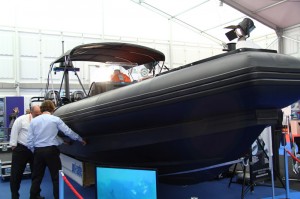 Taking a boat to get to SMM?

“Next time, we’ll take a boat to get to SMM. That’d be faster than taking a car“, one of our colleagues from the SMM team said smiling after returning from SMM. Actually, that’s quite a good idea considering that SMM is the world’s leading trade fair for the maritime industry.

SMM – a trip to distant shores

Over 2100 exhibitors registered for stands – an amount even the organizers didn’t expect. To be able to house them all on the fair grounds, they built temporary “halls”. In one of these new halls, our stand found its home.

All in all, exhibitors and visitors shared a space of 90,000 square meters. If you’re interested in sports: that’s approximately the size of eight football fields. 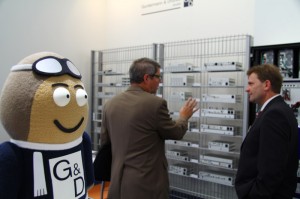 From huge ship propellers for all types of ships up to safety equipment and accessories like cutlery and door handles – SMM provided everything you’d wish for when it comes to any kind of vessel and harbours. At some stands you could even admire some handsome seaman in full uniform.

Only by being on-site, we had the chance to realize how many industries actually interact with the maritime sector. And we weren’t the ones. Many exhibitors and visitors from all continents came to Hamburg to take a look at the many new products for shipbuilding and harbours.

Even historically, SMM had much to offer: Next to our stand, the Paris-based company DCNS, presented its products. As a former state-owned company, DCNS received its first orders from Cardinal Richelieu personally, who’s also supposed to have founded the company.

But the maritime sector has to keep up with the times as well. As almost everywhere, the demands to humans and machines grow in this industry as well. To live up to the ever-changing requirements, ships are usually equipped with the newest products. And we must say that witnessing the merging contrast between the ancient craft of shipbuilding and the latest technology was rather remarkable. 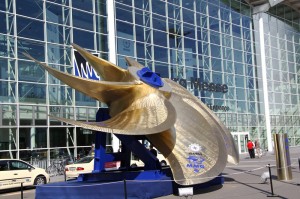 Inside ah, outside hoy…

Even the extraordinary interior design at SMM proved that the trade fair is at the pulse of time. With elements made of glass and steel and other stylish details, SMM met the modern spirit of time. The design concept was completed by eye catchers like huge pink-lit anchors or a golden ship propeller placed right in front of one of the exhibition halls.

New and exciting products to discover

For us, the participation in SMM was a trip to foreign waters. But it was a trip we don’t regret. Our heads are filled with exciting impressions we won’t forget any time soon. And who knows? Maybe next year we’ll be back at SMM.

Didi you visit this year’s SMM in Hamburg? Maybe also for the first time like us? Then leave us a comment with your impressions.

One thought on “SMM in Hamburg – ships, machinery and modern technology”

In this week's @kitplusuk interview, G&D's Jochen Bauer takes a closer look at the RemoteAccess-GATE, which lets you access your #KVM systems at any time from anywhere. youtu.be/eoBxcQhxQu8

Our products and solutions are often hidden. But they are relevant and work. You can rely on G&D. That's quality you can feel. When working in a control room. When installing in a server rack or at workplaces. G&D simply feels right. youtube.com/watch?v=FXbRyY…

At G&D, #innovation and a focus on quality are the driving forces of our daily actions. For this reason, we are incredibly proud to have received the #TOP100 Award as one of the most innovative medium-sized companies in Germany. blog.gdsys.de/en/2021/02/18/…

Jochen Bauer, Director of Sales and Marketing at G&D, speaks to @IntAirport about how we are dealing with the pandemic and helping airports to integrate #KVM solutions into their #ATC. internationalairportreview.co…

For many years, our customers have been relying on us to design and implement remote tower concepts. To find out more about this topic and examples of where our #KVM devices are used, check out @atcnetwork's new ATC special: bulletin.atc-network.com/2021…

Exclusive Mode, a feature of G&D #KVM extenders, comes in handy when used in #courtroom applications. Our blog post will show you how it works. blog.gdsys.de/en/2021/01/20/…

Integrating virtual machines in #KVM installations and operating them remotely – with this solution, G&D's RemoteAccess-CPU impressed @SCNmag. The US magazine named our KVM system Product of the Year 2020. gdsys.de/en/press-news/…

How can you link hybrid structures as flexibly as possible? How do you standardize their use so that operators can handle them easily, efficiently and in line with their needs? The RemoteAccess-CPU is your solution. #kvm blog.gdsys.de/en/2020/12/10/…

Today, topics such as worldwide access to #KVM installations are more relevant than ever. With our new G&D RemoteAccess-GATE, you can access computers from anywhere and at any time. gdsys.de/en/press-news/…

Are you getting nervous when it comes to network requirements for #KVMoverIP systems? No worries! Andreas Gerlach, Field Application Engineer at G&D, shows you how to successfully run a KVM-over-IP installation from G&D. youtube.com/watch?v=uBrgtM…