We were all delighted when we found out that our sales colleague, Oliver Bender (age 35), reached the finish line at this year’s Frankfurt Ironman after a time of 11:03:02 hrs. The Frankfurt Ironman is a triathlon commanding everybody’s respect consisting of a 3,86km swimming event, 180,2km of cycling and 42,19km of running.

That sounds exhausting even to the more athletic and well trained amongst us, never mind the rest of us. Therefore we were curious to find out more about Oliver’s experiences prior, during and after the triathlon. 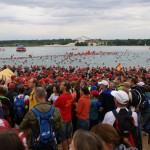 How did you prepare for the Frankfurt Ironman?

Oliver: Preparations started almost a year ago. I already competed in a few marathons in the past, but realized that running as such was not quite what I wanted to do. Spontaneously I got enrolled for the Frankfurt Ironman as it includes two more disciplines I had never tackled before. But given time and stamina, I also mastered those disciplines in the end. During the past 12 months I ran approximately 240 hrs respectively 2.700 km, I swam 82 hrs respectively 220 km and I spent more than 212 hrs respectively 5.000 km on my bike or let me say – I almost became one with the saddle. 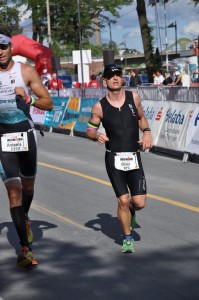 Was there a particular moment during the event when you were about to give up?

Oliver: Yes, there wasn’t just one moment of the kind to be honest. But, there were two occasions I remember in particular thinking I’d not be able to see this through. Once during the first league of the cycling event. Weather conditions were anything but pleasant with strong gales and the rain just bucketing down.

Soaking wet and with limbs frozen stiff I thought I’d not be able to hold out. With dark skies above and gloomy thoughts on my mind, I finally got to the top of a hill overlooking the city of Frankfurt. And mind you … all I could see were blue skies above Frankfurt! This was the incentive I needed to plough on. But then again my spirits were down during the running event. After having covered half the distance, every single step turned into sheer pain and coming up to km35 my knee started aching.

At that point it was only my unbroken fighting spirit and the thought of the time spent preparing for the event that drove me on.

And which place were you in finally? 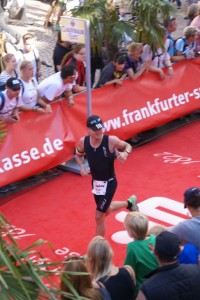 How did you feel reaching the finish?

Oliver: The feeling was indescribable! There is a red carpet as you reach the finish and cheering supporters are lined up to your left and right. I ended up with goose pimples all over.

There was a poster saying: “It is only a few seconds, but during those seconds, you realize why you did all this to yourself.”

Which lasting impressions did you gather?

Oliver: It was great to see how professionally the event was organized! Furthermore meeting with and talking to so many different people during my preparation and the event itself is an everlasting impression. There is a spirit and feeling of community hard to describe as we are all working towards the same goal. But what will be engraved most of all on my mind is the conviction that you can reach any goal if you only have enough willpower. Though I had reached my physical possibilities, it was my willpower that drove me on.

What are your plans for the future from a sporting point of view?

Oliver: The following day I got enrolled for the Ironman 2013. It is my goal for 2013 to improve my time.

This really sounds like a new challenge! Fingers crossed & touch wood for the Ironman 2013!

One thought on “Oliver Bender: The KVM Iron(wing)man”