Every exhibition needs proper planning. Many questions such as what devices and features to present have to be answered in advance. Today, we want to show you, how we chose the devices to set up the exhibition rack for BroadcastAsia.

The centerpiece: the DVICenter DP64

When planning an exhibition rack, the obvious first question is: “What do we want to show?”

For BroadcastAsia2013 we decided that the DVICenter DP64 was to be the centerpiece of our exhibition rack. But which of the many features should we present to our visitors?

Answering this question was easy: We chose to display the CrossDisplay-Switching feature.

After the devices and functions had been established, we started thinking about the features of the console. Since we wanted to show the CrossDisplay-Switching feature, we needed at least two monitors, two DVI-CON user modules, a mouse, a keyboard and two speakers. In addition, we added an iKey, allowing users to freely program hotkeys. 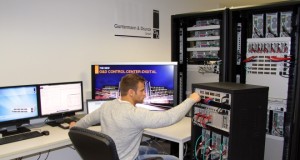 Now that we had defined the features of the console, we needed to think about the computers to which users can switch from the console. Here we chose Mini-ITX motherboards with Intel chipset, Core-3 processors and 4GB RAM. The operating systems (Windows XP, Vista, 7, 8 or Ubuntu / Debian) and the graphics cards (VGA, DVI, DisplayPort) vary depending on the application.

With the help of the CrossDisplay console with two DVI-CONs and two monitors, the image of two computers can be displayed permanently. But since we also wanted to show our visitors that it’s  possible to use a DVI-CON to switch between multiple computers, we decided to integrate three active computers in the matrix.

To be able to connect all three computers to the DVICenter DP64, each computer needs a DVI-CPU computer module for transmitting the KVM signals.

To demonstrate the quality and performance of our products to visitors, we rely on extensive presentations. For this purpose, we use a 46-inch full HD monitor at BroadcastAsia. Both the LCD and the computer on which the presentation is running are integrated into the matrix of the DVICenter DP64 via a DVI or a DVI-CON CPU . 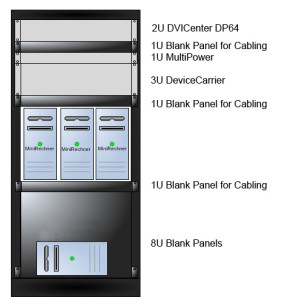 At trade shows, we use racks to present all the computers, CPUs and the DP64. The rack for the BroadcastAsia has 25 rack units.

At the top of the rack sits the DVICenter DP64. Next comes a blank panel including a cable bushing to ensure neat and clean cabling. A MultiPower-12 supplies the computer modules with voltage. Therefore, we don’t need external power supplies for every CPU. The seven CPUs are installed in a 3U DeviceCarrier, which does not only save space but also looks good.

Following another blank panel including a cable bushing, we installed the three computers that can be operated via the console. To be able to properly connect the required cbales (DVI, USB for keyboard and mouse, audio, power, USB2.0), we used another blank panel. The remaining eight rack were covered with blank panels as well. Behind the blank panels hides the presentation computer, since this computer only stores the presentation and has no direct influence on the console.

After the rack was planned in theory, we had to assemble and configure it. We set up the console  with two monitors, two DVI-CONs, two U2-CONs, keyboard, mouse, sound bars and iKey and added the presentation monitor and the corresponding DVI-CON. Then we mounted all devices into the rack. After we had checked the proper cabling, we could start with the configuration of the system.

Now it was time to present the rack and the entire setup to our colleagues in sales. Afterwards, we packed everything and sent it on the way to Singapore for BroadcastAsia. If you want to see the rack live and in action, feel free to visit our stand.

Especially for stationary applications in the professional sector, quality losses during #audio transmissions are a no-go. At G&D, we therefore offer three different ways of transmitting audio signals according to your needs. #KVM blog.gdsys.de/en/2019/04/03/…

We are very excited and proud that our RemoteAccess CPU has been named one of the top products of 2020 by Systems Contractor News! gdsys.de/en/kvm-solutio… #kvm #productoftheyear pic.twitter.com/44aKd0MWMf

The new airport in #Berlin opens at the end of October. But the tower at #BER has been in operation since 2012 and has been controlling all air traffic at Schönefeld Airport securely and reliably with the help of #KVM from G&D. gdsys.de/en/press-news/…

Welcome to your ControlCenter-Xperience Discover our #KVM solutions in a new dimension to understand what we’ve been passionate about for more than 35 years. #CCX #showroom #ControlCenterXperience lnkd.in/dbsYkyH

For years, IP technology has become increasingly important. In today's video we will therefore introduce you to the basics of #KVM-over-IP. youtu.be/qRa6ekJSCVo