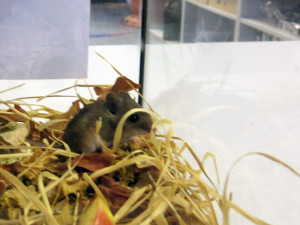 May I introduce myself? My name is Apodemus Sylvaticus; or wood mouse in simple English. But my friends call me Apo.

During winter, most members of my species find shelter in private homes. But to avoid getting caught by some nasty cats, I decided to spend my winter at the industrial area in Wilnsdorf, Germany. Once there, I found a new home at Guntermann & Drunck. They seemed quite nice and most importantly: no cats in sight.

Of course I quickly found my way into the building where I kept myself hidden for a long time. I had no problem living of the crumps I found here and there. And even better: no one seemed to have noticed me – winter could come.

A sweet temptation with consequences

Shortly before Christmas, each employee got a tasty chocolate Santa. And for a gourmet mouse like me, these things are hard to resist. Unfortunately for me, the team immediately realised that I had sunk my teeth into their chocolate treats.

Maybe that was the reason why, that evening, I discovered a strange construction on the floor. I inspected this thing and really: it was a self-constructed trap. Now it dawned to me: The G&D team had declared war.

However, there’s a reason why I’m known as the smartest mouse of Wilnsdorf. I decided to skip the tasty bait in the trap and kept to the crumps lying around the trap. And lucky for me there were still enough chocolate Santas on the tables.

But my enemies became even more aggressive, because the next evening there was yet another trap looking even more sophisticated than the first one. But yet I stuck to nibbling on the chocolate Santas.

When the G&D staff is away, the mouse will play

After a while, all staff members left for their Christmas holidays. I finally had the building to myself. Luckily I realised that the traps didn’t work. Obviously, they didn’t want to kill me – only get rid of me. But I had no intentions of searching for a new home. That’s why I decided to sit back, relax and cherish the remaining sweets.

All good things must come to an end 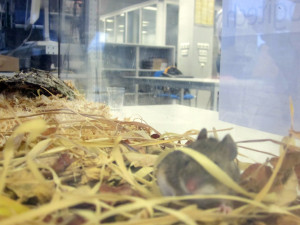 At the beginning of the new year, the lovely folks of G&D returned to their working places. Unfortunately for me, they realised immediately that I hadn’t left much to eat. Maybe that’s also the reason why they decided to ban all sweets from the office. Well, all but the baits remaining in the traps.

They probably thought that soon enough my hunger would drive me into one of the traps. And it kind of did, but it didn’t drive me into but only to the traps. Fortunately I was able to reach the bait from outside. After yet another opulent meal I even took some crumps to stock up on supplies before I decided to lay low for some time.

One evening I left my hiding place in good spirits. But I immediately realised that something was different. Maybe yet another trap? The next day I eavesdropped and heard something about “camera”, “laptop”, “mouse” and “watch”. Suddenly I became so paranoid that I accidently went into one of the traps.

The last thing I realised was the door snapping shut behind me and suddenly I was trapped. After the folks of G&D discovered me in my trap, I became the target of many curious stares. Hopefully they would temper justice with mercy.

Luckily form e, they spared my little mouse life and even brought me to a farm where I live now. I must admit that living amongst cows isn’t as comfortable as life at G&D, but at least it’s warm and I have enough to eat. Let’s see where I will be next winter …maybe back at G&D?