Developing revolutionary devices usually starts with a big idea. However, these ideas can’t be implemented on the go. Rather, in the course of such projects, there are often challenges that perhaps had not even been considered at the beginning. With our new VisionXS extender, the aim was to keep it as small as possible. Nevertheless, it should not only contain our previous comprehensive functions, but also new ones. And all this without requiring the use of fans. In today’s look behind the scenes of the development of the VisionXS, we reveal whether and how we have implemented these ambitious ideas.

Big ideas for a small device

After all, we had many ideas for the new VisionXS. First, we knew that we wanted to place the modules in a smaller housing. Thus, it would be easy to install them especially in applications with limited space – for example, behind the monitors of a video wall or in cramped operating rooms. In addition, they should also be easier to mount. Because where space is tight, no-one wants to install devices in a complicated way using lots of screws.

On top of that, we had the bold idea that the VisionXS should be able to be used in standard networks with a transmission speed of up to 10 Gbit/s. And to add a bit of excitement, we also didn’t want to use active cooling.

The biggest challenges during development 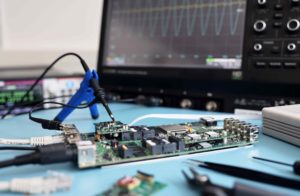 First, we had to consider in which product environment we wanted the VisionXS to compete. On the one hand, we offer our customers uncompressing DP1.2-VisionXG extenders, the cream of the crop, so to speak. But to reach this standard, we need several 10Gb transmission channels. In addition, managing the vast amounts of data requires several high-performance components. Unfortunately, these are often expensive and large and therefore unsuitable for our goal of developing the smallest possible device. We also know that processing a lot of data generates a lot of waste heat.

On the other hand, we have our compressing extender systems. Here, our goal is to come as close as possible to the standard of the uncompressing devices. In this case, users follow the motto: “Making smart decisions on what’s really important.” By effectively making use of the bandwidth, it is possible to run transmission over one channel only.

With our Vision and Vision-IP extenders, we have found a compromise between costs for high-performance hardware components, required transmission channels and the production of waste heat. Here we transmit data at 1Gb per second (with DP1.2-Vision-Fiber approx. 2.5Gbit/s). And that works really well. But for VisionXS sky was the limit. We were aiming for a data rate of 10Gbit/s. However, this aspect presented the next challenge during development: cooling.

Transmission speeds of up to 10 Gbit/s without active cooling – how is this even possible?

To be able to transmit ultra-high resolution (UHR) images at 10Gbit/s with the new VisionXS, we needed powerful cooling. But a fan on the front would not only have looked rather unattractive, its noise would also have disturbed people working close to the device. So it was up to us to create a new housing concept and develop a new housing. It should be able to absorb waste heat and dissipate it quickly. As a result, we now have a housing that functions as a heat sink. Now the heat from the components is conducted directly into the housing, and we can use 10Gb in a small, passively cooled device. At the same time, we have also adapted our own HDIP (High Dynamic Image Processing) compression technology to the new 10G option Through flexible negotiation of speeds, the device of course also still supports 1G transmission rates.

Cool device thanks to cool heads

Even though this all sounds quite simple, it was not only our development team that put several years of intensive work into developing the new device. Since the first idea in 2018, new ones have been added, discarded and re-imagined again and again. After all, it is often the smallest devices that present us with the greatest challenges. But when a high-performance device like the VisionXS is the result of all these efforts, the work has definitely been worth it. We are proud of it and curious what you will think of our new handy extender, which you can pre-order now. Our new all-rounder will enter the official KVM stage in autumn 2021.

Until then, we will of course provide you with more insider information about our new pocket-sized extender and its functions. The small multifunctional tool still has a few surprises in store. And if you don’t want to wait this long, we already provide some information about the VisionXS on our website.

G&D in the news